Download Kati Update 3 (For No Copy) An icon used to represent a menu that can be toggled by interacting with this icon. IoRtCW Wolf Patch 1.42b Windows (32/64bit) After a year of development, I've decided it's time for a release. Wolf 1.42 (aka iortcw) is an updated game engine for Return. BlackFire's Mod 2 (MaLDoHDv4 Compatible Version) Mod Posted almost 8 years ago; 248 downloads; Enhancing colors, sunshafts, and more, turning that foggy atmosphere of the original Crysis 2 into a clear and sunny day, allowing a better gameplay with an innovative look. Crysis 3 - v1.3 - v1.5 +8 TRAINER - Download. Gameplay-facilitating trainer for Crysis 3. This trainer may not necessarily work with your copy of the game. File type Trainer. File size 148.5 KB. Last update Thursday, March 6, 2014. Downloads 74771. Downloads (7 days) 327.

This is the second v1.2 patch for the critically acclaimed Crysis. Patch 1.2 can be applied to both vanilla Crysis (v1.0) and Crysis v1.1 since it will update automatically to Crysis version 1.2. Make sure to get the

to update the game to the latest version.

Read the Changelog below for details on all the different performance

* Corrected a number of memory leaks with FSAA modes.

* Destroying objects will now properly remove their decals from the world under DX10.

* Fixed a number of memory leaks with some procedural vegetation and destroyable objects physicalization.

* Fixed issue in windowed mode where the map or weapon attachment UI cursor can leave the game window.

* Fixed potential server exploit that could cause servers to crash

* Fixed crash with AI triangulation in the editor

* Added new effects for vehicle shattering after being frozen

* Player movement will now be cancelled if the player is shooting while moving in prone mode.

* Fixed an issue where vehicle 3rd person camera could break when switching the player ?ControlledTurret? flag while using the gun.

* Frogs will no longer block the player?s view after being picked up

* Fixed an issue where in unarmed mode, the character's arms will suddenly reappear and disappear when picking up and dropping an object.

* If climbing a ladder while cloaked, energy no longer depletes at the same rate as if player were standing still.

* Mouse cursor will no longer be permanently removed on attaching gamepad.

* Fixed issue where the Clear All and Back Keys do not function properly when creating a profile on the gamepad.

* Fixed the 'Back' key in the on-screen keypad not deleting the first character in the keypad text box.

* Fixed the 'Clear All' key not functioning for text input in the on-screen Keypad.

* Waterfalls can now be viewed from underwater.

* Fixed an issue where users can lose the ability to look around with the Right Stick.

* Player no longer continues to move forward when prone on roof of bunker after letting go of button.

* Fixed a number of chainlink fences/barbwire that could not be shot through.

* Fixed issue with vehicle mounted MOAR reload sound being audible for all players.

* C4 can no longer stick to the surface of water

* Fixed an issue where the player could shorten the shot duration of the MOAR near the edges of a map.

* Fixed an issue when using dual handguns and switching to 3rd person view, a pair of arms will remain when running devmode or in editor

* Fixed an issue where the player could force firing after reloading if player clicks and keeps pressing fire button while reloading.

* Explosive charges no longer clip through the top of the NK tanks located in the munitions dump in mission tank.

* The ice beam animation from the moar gun no longer clips through the walls of tunnels.

* When freezing a dual-SOCOM player, the second pistol will now be properly frozen.

* Freezing a player that is shooting a MOAR will now properly stop the MOAR's beam.

* Nano-Disruptor grenade will no longer disrupt the revive invulnerability effect.

* Players are no longer revealed to enemy on enemy minimap when using silencers on weapons unless they are within 5 meters of another player.

* When prone with a sniper rifle, the attachments menu should no longer be cut off. 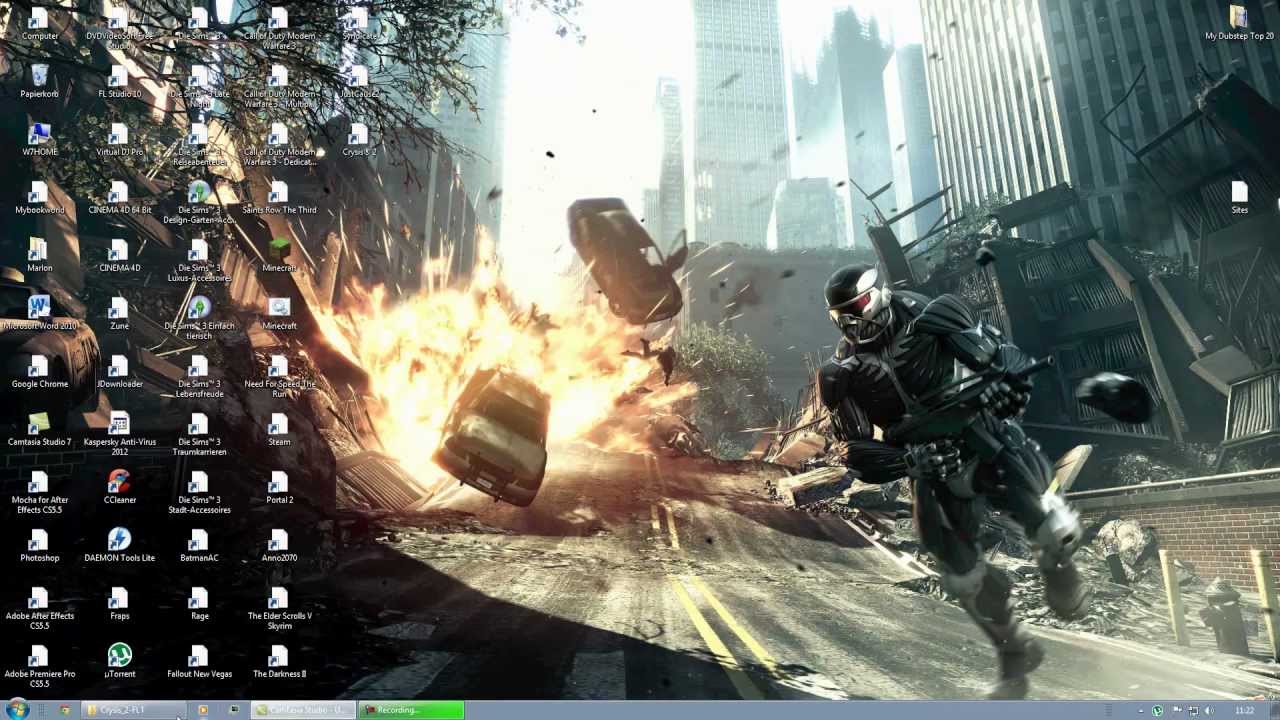 * The crosshair for the TAC no longer disappears after the player zooms in and out of ironsight mode.

* Added missing animations for FY71 and SMG when holding an enemy and using the melee attack.

* Fixed issue when the player dropped last picked up SOCOM, even if that is the pistol with the most ammo.

* Improved the behavior of guided rockets, when aiming through player collision proxies. This should reduce instances of rockets flicking away from targets occasionally.

* Improved the HUD Grenade Indicator - Players will now be able to track one enemy and one friendly grenade. Enemy grenades show up as red, friendly as blue.

* Fixed a number of issues where the grenade indicator was not showing up on multiplayer clients.

* Improved the behavior of the Repair Kit, when repairing rotating turrets.

* Fixed an issue with some weapon effects that would cause explosions not to be rendered.

* Helicopter wind effect no longer plays after vehicle is destroyed.

* Fixed a number of issues where players getting out of vehicles would get stuck in walls.

* Components can no longer be more than 100% damaged.

* Tweaked damage for players hit by vehicles at lower speeds

* Smooth out change between vehicle views when changing seats.

* Vtol cannon now has correct spin up or spin down sounds

* Fixed potential issue with tank turret rotation when a second player takes control of vehicle, the turret could be unsync?d between server and clients.

* Increased VTOL vulnerability to being hit by other aircraft cannons

* Fixed an issue where vehicle ammo could become greyed out when in a vehicle in a valid buyzone.

* Disabled vehicle exploding above a certain speed threshold in MP and SP when there isn?t a player in the vehicle.

* Adjusted damage of rockets vs. AAA

* Player will now be prone if loading a level that was saved while they were prone.

* Fixed an issue with troopers missing shield fx if the player was holding them when the level was saved and loaded.

* Fixed issue where after saving the game manually while in the shell, the save will not immediately appear in the save list.

* Player no longer has grenade controls during cutscenes

* Player is no longer able to carry enemies into cut scenes.

* Helmets on the Navy personnel on the flight deck now fit their heads.

* Added a missing texture at the base of doorway leading to schoolhouse roof from staircase in village.

* The paper on all of the clipboards through out fleet no longer appears to be upside down.

* Helmets will never deflect shots when the player hits them while using weapon sights.

* Fixed issue where death effects were only showing on remote players.

* Server admins can now remove the server password with 'sv_password 0'.

* Clients with a password set can now correctly connect to unpassworded servers.

* Fixed some game states not properly resetting after game restart.

* Fixed an issue where factory vehicle marker was not showing up for clients. The vehicle you purchased is now visible with a blue icon.

* Fixed an issue where scores could change after the game has ended.

* Fixed issue where sometimes demotions would not be properly announced.

* Radio commands will now be properly played as a voice sound.

* Fixed an issue where standing on a crouched squadmate would cause model clipping.

* Fixed an issue where the player was unable to purchase additional mines or claymores through load out menu if one already in inventory.

* Player can now no longer create and save unpurchasable custom loadouts by including multiple pieces of kit equipment.

* Player can now no longer create custom loadouts with more weapons than the player can carry.

* Fixed issue where tutorial message warning player of an enemy base is played too late.

* Fixed issue where tutorial message starts too soon when player gets to the aviation factory.

* Player no longer gains 1 free grenade when he uses up all ammo in a grenade launcher and purchases a different weapon.

* Fixed an issue where if the player picks up a claymore after placing two claymores, player's weapon will not switch to claymore upon pick up.

* Player can no longer suicide when already dead.

* The loadout menu no longer changes to the weapons menu when an alert event occurs in the game.

* When using PDA, if any player captures a location it will no longer revert to the first page of the PDA.

* Players will no longer be banned for team killing while in pre-game period.

* Players will now be able to pick up a respawned MOAR attachment.

* Fixed not being able to scroll player names on end of game scoreboard.

* Fixed an issue where the character's hands immediately disappears when attempting to throw a grenade with dual socoms equipped.

* When grabbing an enemy while Dual SOCOMs are equipped the right hand SOCOM will no longer disappear.

* Fixed an issue where the parachute is not seen by players when deployed in Powerstruggle.

* Map filter no longer allows the user to input an infinite amount of characters.

* Fixed issue where the player score was not the default view when pressing the 'Tab' button in MP.

* Fixed a number of issues where projectiles are not playing explosion effects and sounds on clients.

* Teamkilled players will no longer drop their weapon.

* Fixed an issue where enemy HQ flag icon would disappear.

* Added some additional clamping and protection to some console variables that could be used to cheat.

* Added a number of warnings for incorrect map version and missing maps when connecting to servers.

* Added a number of missing additional entities to the network scheduler

* Fixed an issue where players could be killed with AV mines placed above vehicles but not in contact with the vehicle.

* TAC icon for enemy players will now disappear when the player who is carrying a TAC launcher cloaks.

* Added auto team balance. Players will now be moved from full teams to the opposing side when dead if the numbers are unbalanced.

* Added vehicle-specific shatter effects when vehicles have been frozen.

* Added mod loader to the main menu. User created content can now be loaded and unloaded through this menu.

* Added some additional audio hitfeedback functionality to multiplayer and singleplayer bullet impacts. Headshots will include an audible ding in multiplayer games.

* Added additional audio feedback for player hitting enemies. The feedback can be disabled with 'g_useHitSoundFeedback 0'.

* In single player, AI can now be knocked over while running into them in speed mode.

* Added numbers to energy bar in PowerStruggle for quicker reference